Albert Nobbs is a strange little film. It is a bittersweet fairy tale in the tradition of Hans Christian Anderson. It does not have the high fantasy or grotesque elements of the Grimm Brothers nor the sugar-coated delicacy of Disney. It is a a minor tragedy centered around an exceptional individual who makes the mistake of stepping outside of himself.

The love triangle of Albert Nobbs: the Maid, the Waiter, and the Handyman

Albert Nobbs has successfully disguised himself as a man for most of his life. From the age of fourteen, he has become a self-sufficient and highly sought after professional waiter in the finest British hotels and banquet halls. A chance encounter with another woman disguised as a man, Hubert Page, rocks his world, pushing him into strange new social situations and altering the safe and steady path to his dream.

Glenn Close pulls quadruple dutys on the film, starring, writing, producing, and even composing the cathartic lullaby that ends the picture. With her co-writers John Banville and Gabriella Prekop, Close creates a world thriving with life in Nobbs’ hotel/home. Each character, no matter how minor, is full-bodied and alive. The waiters all have their own backgrounds; same for the maids, guests, and owner. This means that even when Albert is not in a scene, the film does not suffer from artificiality.

All Albert Nobbs suffers from is a lack of Albert Nobbs. Despite being front and center in most scenes, Albert is missing from a key series of scenes that are all about him. Hubert Page convinces Albert Nobbs to take a wife. Nobbs sets his sights on Helen, a young maid, who is madly in love with Patrick, a handyman. Patrick convinces Helen to use Albert for financial gain. These scenes–essential to the story–feel out of place without the quiet gaze of Albert Nobbs. As soon as Albert is back onscreen, the story comes alive again. Without him, it stops dead in its tracks.

The double-edged sword of Albert Nobbs is the character of Hubert Page. There is no story without him. The film wants to be the story of this strange little man Albert Nobbs but Albert does not live in a bubble. For good and ill, Hubert Page drives the story. He exists to open up Albert to a larger world he never imagined. With Hubert’s arrival, the story has to shift outside of Albert’s life to make sense. Without Hubert’s interference, there would be no conflict and no story.

It’s so hard to reconcile these few distractions with what is otherwise such a sweet, sincere, and lovable film. You want to love the film Albert Noobs more than the titular character is capable of expressing. He has hidden his emotions and personal life for very good reasons and is still capable of being everyone’s most trusted ally. Close wisely refuses to let his voice go louder than a normal speaking tone (and that’s at his most panicked state) or move in any way that suggests less than professional behavior. Nobbs is a closed book who only cracks open his cover a tiny bit under the brute force of Hubert Page.

Janet McTeer has the hardest role in Albert Nobbs playing Hubert Page. It is her job to pass for a man–same as Close–only her man is loud, boisterous, outgoing, and utterly normal. He is a strong tradesman, a loving husband, and a perfect foil to Nobbs. Page chooses to hide by going over the top with his confidence, while Nobbs hopes to camouflage himself in the unflinching professionalism of a waiter. McTeer doesn’t open up more than Close does even when she has every reason to burst into hysterics, rage, or fear. She’s doing everything Close does, only amplified a hundred times over.

Together, the Close/McTeer duo keep the film afloat. Albert Nobbs, with a lesser cast, would be insufferable pablum. The coincidences would be a bit too unbelievable. The plot twists would be too calculated. The sincerity of Nobbs and Page would be nonexistent. These flaws overwhelm the film when Nobbs or Page are not the center of the action.

I know that Albert Nobbs will not please everyone. I must reiterate that it is a fairy tale. It is a fluffy cloud of a film about to shift into a gentle cleansing shower. Close and McTeer bring far more depth to the story than it requires to be told. Their presence is the reason to see it.

It’s a silly little fantasy about a woman living as a strange little man that only earns its final somber turn on the backs of two accomplished performers. If you’re willing to give yourself to something beautiful, heartfelt, intentionally uneven, and even a bit odd, Albert Nobbs could be the film for you.

Thoughts? Love to hear them. 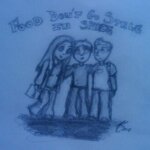