The first thing you need to know about X-Men: Days of Future Past is that it’s not actually the story you might know as “Days of Future Past.” In order to fit in with the framework established in First Class and the popularity of certain mutants, the time setting, key characters, and metaphors (and by metaphors, I mean what metaphors anymore?) have been altered significantly.

Get past that disappointment, and it turns out that Days of Future Past is the strongest X-Men entry yet.

END_OF_DOCUMENT_TOKEN_TO_BE_REPLACED

Rigor Mortis is one of the most beautiful and emotional horror films I’ve encountered in many years. An actor moves into public housing in Hong Kong when his career begins to fail. He attempts to kill himself, but is saved by a Taoist exorcist who senses something is wrong in the long-haunted apartment 2442. The actor soon discovers that nothing is normal in his new home. Ghosts, zombies, and vampires roam the halls and coexist with the tenants. Everything is balanced until a generous older tenant loses her husband in a tragic accident and wants nothing more than to spend the rest of her life with him intact.

This Cantonese language horror from Hong Kong is not afraid of the darkness in the soul. Rigor Mortis is a sad film filled with sad characters and sad stories. These tenants, new and old, have been through more than their fair share of tragedy and nothing is held back.

END_OF_DOCUMENT_TOKEN_TO_BE_REPLACED

Dredd is one of the most successful comic book to film adaptations I’ve ever encountered. Sure, it’s not 100% faithful to the source material, but the tone, characters, and style are just right. Screenwriter Alex Garland spins some well-worn tropes for police/action films into something that feels unique, even when blatantly lifted from other sources.

The universe of Dredd is an interesting dystopia. There are no more courts. The police officers are referred to as judges because they capture, interrogate, and punish criminals on the spot. Judge Dredd is assigned a new trainee, Anderson, on an investigation into an apartment tower run by notorious criminal mastermind Ma-Ma. Anderson, who has possessed psychic abilities since she was a young girl, and Dredd get trapped by Ma-Ma’s high tech security and must fight their way to the top with their suspect to dispense justice.

END_OF_DOCUMENT_TOKEN_TO_BE_REPLACED

In an unidentified future, there sits an elite academy on top of a city. Student council president Satsuki Kiryuin holds power over the school, establishing an elaborate militaristic caste system defining every student’s role. Level 2 and higher students receive technologically advanced uniforms that transform into battle-ready suits tailored to their individual skills. Students become super soldiers inspired by music, tennis, and even juggling. A new student, Ryuko Matoi, arrives on campus to avenge the death of her father, the inventor of the fabric used for the super suits.

Kill la Kill is a low budget anime series written directly for television. The lower budget and shorter production schedule give it a nostalgic animation style that makes the satire hit even harder.

END_OF_DOCUMENT_TOKEN_TO_BE_REPLACED

Something is very wrong in the Marvel cinematic universe. Everything you thought you knew about S.H.I.E.L.D. and Steve Rogers’, aka Captain America’s, role in America has changed. A suspicious mission saving a S.H.I.E.L.D. ship from French pirates leads to Nick Fury being questioned by his international superiors about the true nature of his actions. Stranger still, a mysterious assassin known as The Winter Soldier has appeared, turning Captain America and Black Widow into fugitives with three shots.

Anthony and Joe Russo, taking over directorial duties from Joe Johnston, have taken an entirely different approach to world of Marvel. They have created a spy thriller using superheroes. Captain America: The Winter Soldier is the most shocking and action-filled Marvel film yet. This combination of characters allows for a far more grounded approach than any of the other solo superhero properties so far.

END_OF_DOCUMENT_TOKEN_TO_BE_REPLACED

In The Hunger Games: Catching Fire, Katniss Everdeen has gotten herself into more trouble than she can imagine. Her desperate act to save herself and fellow District 12 tribute Peeta Mellark has gotten her on the wrong side of President Snow. Katniss accidentally sewed the seeds of a revolution against the Capital, and it becomes her job to squelch it on the Victory Tour. When her efforts fail, she is forced into the Third Quarter Quell–the 75th Games–under the guise of the founders of Panem wanting to prove that no one, no matter past successes, is above the needs of the country. 24 former victors who believed the games guaranteed peaceful lives are forced to fight again because of Katniss.

Unlike last year’s The Hunger Games, Catching Fire is afraid of changing the text of the story. There is no new clever device to show the inner monologue of the characters (like the addition of color commentary from the TV hosts in the 74th Hunger Games) and, even more surprising, no real character development. The Hunger Games worked because every character who had an impact on Katniss’ life felt important; in Catching Fire, only her family, friends, and fellow victor Peeta are important. That’s a problem.

If you are going to make a film where the majority of the running time is people killing people in blood sport, there has to be some level of empathy. It cannot be a false empathy wrought from bad things happening to normal people. It needs to be earned. The victims in the first film who had relevance to Katniss’ story earned the emotions that followed their fall. Her fellow victors are given nothing to do to earn the same this time around.

END_OF_DOCUMENT_TOKEN_TO_BE_REPLACED

Nicholas Winding Refn has a mission. As a writer and director, he wants to take the subject matter of action films and raise it to high art. It’s a really interesting cinematic philosophy so far removed from anything else happening in mainstream or arthouse filmmaking that it’s going to be totally hit or miss in its impact. The flaws are perhaps the most endearing parts of films like Bronson and Drive.

Only God Forgives does not have much of a story. It’s a spiraling revenge fantasy where every action has a more extreme reaction. Billy and Julian are American brothers living in Thailand. They run a kickboxing gym as a front for a drug smuggling operation. One night, Billy decides he wants to find an underage prostitute and winds up murdering her. Chang, a high ranking police officer, decides to let the girl’s father have his way with Billy before punishing the father for letting his daughters enter the sex trade. Billy and Julian’s mother arrives from America to claim Julian’s body and revenge for his murder.

There are no real levels in Only God Forgives. It’s a visual experiment in slowing down a typical (if a bit darker) action/thriller and telling the story solely through mood and physical business. The nuance of the story is lost to the overwhelming visual and audio design. It’s like Refn is playing with the alienation effect, forcing the audience to realize they are watching a totally manufactured story in every frame and refusing any semblance of emotional connection to the characters onscreen.

END_OF_DOCUMENT_TOKEN_TO_BE_REPLACED 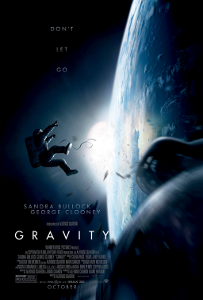 Lieutenant Matt Kowalski is in charge of a five-person mission to the Hubble Space Telescope to install Dr. Ryan Stone’s new monitoring equipment. Everything is going fine until mission control announces that a Russian satellite has blown up and the debris may be heading their way. That is quickly upgraded to abandon the Hubble and flee the scene to stay alive, which is promptly followed by Kowalski and Stone drifting in space in radio silence, the only survivors of a routine maintenance mission to space gone horribly wrong.

Alfonso Cuarón has crafted his true masterpiece in Gravity. George Clooney and Sandra Bullock create believable characters in Kowalksi and Stone, but it is Cuarón who is the star of the production. Everything is about a deft director handling his own screenplay (written with his son Jonás Cuarón) with incredible style and urgency.

Five time Academy Award-nominated cinematographer Emmanuel Lubezki (The Tree of Life, Children of Men) helps create some of the finest moments of 3D cinema ever projected on a screen. If nothing else, Gravity evokes its haunting terror by showcasing just how vast space is. The screen falls back for hundreds, if not thousands, of miles to sell the narrative of two astronauts drifting through space with only the slightest chance of survival.