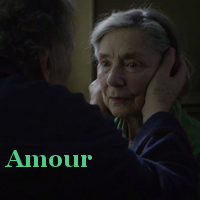 How far would you go to provide comfort and care for the person you love most in the world? Would you sacrifice your own independence to take care of them full time? Would you go against the will of your family and friends to fulfill your love’s biggest desire? Would you stand by their side as they slowly fade away due to medical problems that surface overnight and only get worse?

Amour is a film about coping with death and the end of life. The title is not a misnomer, but a device to help you invest in a very bleak story.

Anne and Georges are retired music teachers living a beautiful and fulfilling life together in their gorgeous apartment. After watching one of their former students perform a piano concert, Anne suffers a stroke at the breakfast table and has to undergo a low risk procedure to hopefully correct the damage; it fails, leaving her paralyzed on the right side of her body. Georges is now Anne’s full time caretaker and does everything he can to make his wife comfortable and happy in her final days.

Writer/director Michael Haneke, probably best known in America for Funny Games or perhaps The Piano Teacher, creates his least sensational film to date. Amour is a quiet, slice of life drama that just happens to focus on a catastrophic time in a married couple’s life. The effect is very Modernistic in the Virginia Woolf style, immersing you in a world that rises and falls in gradations of human experience like waves breaking on the shore.

With the exception of the concert scene (a beautiful piece of minimalistic action where the patrons all sit around in private conversation waiting for the performance to begin, never once showing the act onstage), Amour takes place entirely in Anne and Georges’ apartment. The design and layout is stunning. There are secrets in the design slowly revealed as the film goes on that really enhance the struggle of the characters. From the narrow doorways that barely allow Anne’s wheelchair to pass to the unending procession of elaborate chairs, the home slowly transforms from a spacious palace to a claustrophobic prison for retirees.

Emmanuelle Riva and Jean-Louis Trintignant carry the film as Anne and Georges. Riva has a beautifully expressive face that makes the damage from the stroke all the more tragic for the couple. In early scenes, she doesn’t even need to say a word for you to know what she is thinking; as the film progresses, communication becomes more and more of a struggle. Riva clearly shows this frustration throughout her whole body.

Trintignant has the harder role as the support figure in the family. He doesn’t get flashy makeup or increasing physical odds to help convey his character arc. His role is deeply physical, requiring him to brace, feed, and cater to his partner’s every need. The beauty of Trintignant’s work comes out in his interactions with the outside world–the landlords, his daughter, his son-in-law, his former student, the nurses–that allow him the briefest moments to escape from the woman he loves and all of her struggles.

Amour is bold in its refusal to be anything louder than a whisper once the story is underway. It’s adventurous in its choice of subject matter and its refusal to conform to traditional narrative structure. It is beautiful to watch and heartbreaking to think about. None of us make it out of this life alive. It is the people who we love and choose to be with that make life worth living until the bitter end.

Thoughts on Amour? Had I been able to see it before my own awards went out, it would have factored into Best Film, Best Actress, Best Actor, Best Director, Best Screenplay, and Best Use of Music. There’s one more category it will play into because I caught the film just in time to include it.